Tips For Teaching Kids About Flossing 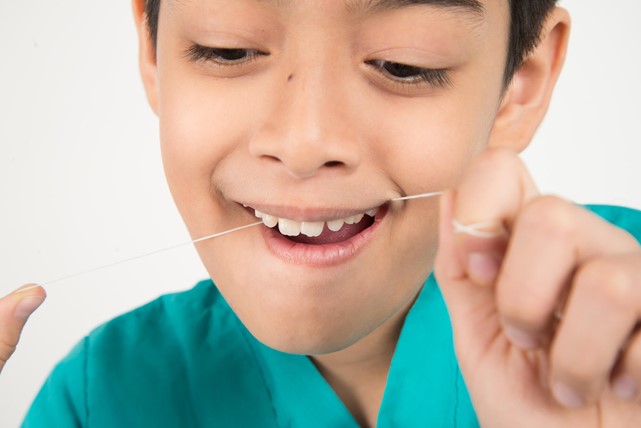 Flossing is an essential part of dental health. However, many American adults aren’t in the habit of doing it regularly. Only 16% of adults floss every day. The main reason most people skip flossing is that they don’t form the habit early in life. That’s why it’s important to teach your kids to include flossing in their daily routines.

Children should start flossing as soon as their teeth no longer have gaps between them. This can happen anytime between the age of two and six. If kids don’t floss regularly, plaque will build up between the teeth in places that are impossible to reach with a toothbrush.

The earlier you begin teaching your child to floss, the easier it will be for them to form a lifelong habit. Flossing requires some precise motor skills. Because of this, young children may need help at first. Even if they’re not ready to do it independently, though, introducing the routine early is vital.

Show kids what flossing is and why it’s important. As soon as they are old enough to understand, they can begin to form their own habits while consciously monitoring their own dental health. If they are aware of flossing, they’ll begin showing an interest as soon as they’re able to manage it.

Floss At The Same Time Every Day

The easiest way to remember to floss is to make it a habit that occurs at the same time every day. Usually, this means just before bedtime. Some children need only 5-10 minutes for their bedtime routine, while others may need an hour. Choose a time that works for your child, and begin the routine at that time every day.

There are usually many steps involved in a bedtime routine. Putting on pajamas, brushing and flossing, maybe taking a bath, and whatever else your family likes to include. If you do each part of the routine in the same order, it will also be easier for your child to remember each step on their own.

Children love to imitate adults. A common reason for a child to resist bedtime routines is because they notice their parents don’t seem to be getting ready for sleep at the same time. A great way to get kids excited for their chores and routines is to show that grown-ups do those things, too.

This principle applies to flossing, as well. Every night before bed, go through the bedtime routine with your child. While your child is brushing their teeth, brush along with them. After brushing, emphasize the importance of flossing at the end of this routine by participating with your child. When you do, it will make them feel included in grown-up habits, and they’ll look forward to flossing each night.

Also, be sure to have a positive attitude about flossing because kids can pick up on your feelings. When you speak negatively about a particular activity, kids will likely imitate that. If you act excited, however, they’ll imitate that as well.

Luckily, you’re not the first parent to have to teach their child about flossing. Countless parents have come before you and wondered how to encourage their kids to floss regularly. Because of this, people have invented flossing tools that appeal to children. Flossing picks are one of those tools.

A flossing pick is a piece of plastic that holds a small string of floss in place to make it easier to hold onto while reaching every part of the mouth. Flossing picks help children learn to floss because they’re simpler to use.

Flossing picks come in all sorts of bright colors, and sometimes they’re even shaped like animals or other fun shapes. A great way to motivate kids to floss is to let them pick out the flossing tool they’d like to use while you’re at the store. When they choose their favorite colors and shapes, they’ll be excited to try out the new tool as soon as possible.

When kids are young, they’re naturally interested in fun. Brushing and flossing aren’t always fun unless you make them fun. Let your child choose a song they enjoy, and make that the flossing song. Whenever it’s time to floss each day, turn on the song, and floss until the song is over. This will create a positive association with flossing for your child because they’ll enjoy listening to music while taking care of their dental health.

Make It A Game

Another method for turning flossing into a fun routine is to make a game out of it. You can make a chart for bedtime routines and let your child choose a sticker to place on the chart for each piece of the routine they remembered to do. Make sure to include both brushing and flossing as part of the chart.

Decide how many stickers your child needs to earn before they get a reward. Choose a reward that’s motivating. It could be that your child gets to watch their favorite movie, stay up an extra half hour, or go on a fun outing to the zoo or aquarium. This will help your child get excited about flossing, as well as other responsibilities.

Another way to turn flossing into a game is to see who can think of the silliest way to floss. You could floss while dancing, making silly faces, or making animal sounds. Anything that gets your child to think creatively and laugh will work. Not only is it a good way to encourage lifelong dental health, but it can also become a creative outlet and a fun bonding activity for you both.

As a parent, you can set your children up for success for their whole lives. Your children's dental health is a key part of that success. When you teach beneficial flossing habits to your children while they’re young, they’ll experience the benefits for the rest of their lives.